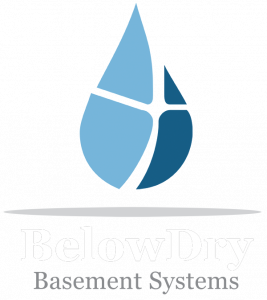 Your source for wet basement solutions in Rochester and beyond, BelowDry Basement Waterproofing helps you keep your home safe, clean, and dry. We’ll deliver a basement waterproofing system that addresses the root cause of your wet basement and solves your water issues once and for all! For your protection, all of our drainage systems are backed by a lifetime warranty.

If your home basement is prone to dampness, foundation leaks, or even seasonal flooding, then you’re at risk for dangerous mold growth and structural damage. However, when you call the specialists at BelowDry Basement Waterproofing in Rochester, you can get the drainage systems you need to keep your basement clean, dry, and healthy.

We’ve been working in the basement waterproofing trade for 11+ years, which means we’ve seen virtually everything there is to see when it comes to cracked foundations, wet crawl spaces, flooded basements, and more. You can count on our expertise to deliver the effective, long-lasting drainage systems you need, while you can count on our honesty to never pressure you into purchasing something you don’t need.

We’re proud to create wet basement solutions for homes of all sizes in the Rochester area, so call now to get started!

About Us
Book Your Appointment

Charles Predmore
The owner of the company, John Crumb was on the job leading his crew. I found him most helpful and professional. He and his crew were very hardworking and took pride in what they did. At my request John coupled one of the gutter downspouts with the sump pump discharge line and made the buried pipes almost impossible to see that a ditch was ever dug. He was careful to protect things in the basement with a plastic barrier and then when the job was done took down the barrier;baged it up and carried it away. the floor was also cleaned. John and his crew went overboard to try to meet our needs. My wife and I are very pleased with their work and we highly recommend them both for their work and reasonable pricing.

Jeremy Valente
John and his crew did my grandmothers basement 5+ years ago. It used to get so bad there would be a foot of water in it. To this day it is bone dry, you get every dollars worth when you go with these guys.

Alisha Banks
My basement had issues with drainage. I had no recommendations for a contractor that specialized in foundations so I resorted to google reviews and hoped for the best. John, the owner is a really good guy. He was always a phone call away. After talking with him I got a sense that he cared about his business and his customers. He explained in detail what work was involved and when he could start. Needless to say he delivered from start to finish. There were no hiccups. The price was reasonable for installing a sump pump, drainage around the perimeter and vapor barrier along the foundation walls. The crew was great too.

Anna Moretti
John the owner was very knowledgeable and responded right away to request for an estimate. He gave me various options to consider based on my budget. I would definitely recommend BelowDry and John!

Kevin Fagan
John was great to work with. He has a positive attitude and is a great communicator. Our basement is now dry. John provided tips to do work myself, and even offered to stop by and help if needed. Had one minor issue after wok was completed- not below dry fault, but they are quickly responding. I would absolutely recommend Below dry, particularity over larger companies that offer the same service but with higher cost. John was there from start to finish, its encouraging to know there's honest caring contractors like Below dry out there. Thanks to you and your team! Kevin

Bobby DeFreze
John and his crew were incredibly professional, organized, friendly, and fast. Transparency and honesty was evident from the initial consultation. The speed in which they accomplished the repairs was exceeded only by the quality and efficiency of their work. They also kept what could be a very messy and dusty job extremely neat and cleaned up very well after the last day of work. I will 100% be recommending them to any friends and family who experience any similar issues with water in their basements.

Steve Lehman
These guys were the best! My basement has bever been so dry and comfortable! We got a Christmas card in the mail.today which I did not expect. 1,000% would recommend. They were fantastic!

Nate
The short version: I would 100% recommend BelowDry to anyone with basement issues. John and his crew are hard working, they respected my home, and their final result is impeccable.

The long version: My wife and I noticed water coming through one of our basement walls when it was raining outside. We called BelowDry along with 5 other foundation companies. John was the first one who actually looked over the entire basement instead of just the one wall. John thoroughly explained why my wall was leaking water and what had to be done to fix it. My basement needed the drainage system replaced. He answered every question I had and his quote was very fair."

When John and his crew of 2 other guys arrived they got to work immediately. They laid down cardboard to protect my floors in areas they would be walking then laid a drop cloth over that. Over the course of a week they moved everything in my basement away from the walls, wrapped everything in plastic, cut open the perimeter of the basement floor, dug out the old drain tile system, carried countless 5 gallon buckets of old material out, installed a new PVC drainage system with new stone, painted the walls of my basement, covered the walls in vapor barrier, poured new concrete around the perimeter, installed new glass block windows and exterior window wells.

John and his crew worked extremely hard and it's clear that they enjoy what they do. I am 100% satisfied with their work. I would recommend them to anyone who is having issues with water in their basement.

Visit us on Google Maps!

At BelowDry Basement Waterproofing, our passion is helping homeowners who have wet basement problems. Because these problems can pose health and safety risks for you and your family, we do everything we can to outfit your home with a basement drainage system that delivers the goods. That’s why we use only top-of-the-line, professional-grade drainage systems from Drain-Eze. In our expert opinion, these are the best drainage systems on the market, so you’ll get the greatest value from your investment.

Of course, we provide more solutions than merely drainage systems. For instance, our wet crawl space solutions often involve encapsulating the crawl space with a VaporBright water barrier. And if the root of your problem is a cracked foundation, we’ll carefully and expertly repair and waterproof your foundation to prevent any future leaks.

Unlike other basement waterproofing companies—especially the bigger names—BelowDry Basement Waterproofing stays committed to what’s best for you. We actually do the hard work to address the underlying cause of your wet basement problems, rather than simply putting a Band-Aid on top of them.

Moreover, our only goal is to help you solve your problem, so we only recommend drainage systems that will actually benefit your situation. In other words, you can trust we won’t scare you or pressure you into installing expensive bells and whistles you don’t actually need. And to top it all off, we offer a lifetime warranty on all interior and exterior systems we install!

Ask About Our Warranty Offerings!

When you contact the basement waterproofing specialists at BelowDry Basement Waterproofing, we’ll schedule a time for us to come out to your property and take a look at your basement or crawl space. We’ll listen to your concerns, examine your foundation, and come up with a strategy that fixes all of your issues and prevents them from returning.

Best of all, we won’t send salespeople to do your estimate (which is a common practice for many other basement waterproofing companies). Instead, we send actual specialists—the same ones who will be performing your drainage system installation. This means you won’t be treated like a sales prospect. Rather, we’ll treat our meeting like the problem-solving opportunity it truly is.

So, ready to get started? We’re here to provide expert wet basement solutions for homeowners in East Rochester, Rochester, Webster, Henrietta, Brighton, Buffalo, and anywhere else within 100 miles! Contact us today to schedule your free estimate!